In first week of August a two-day awareness campaign on Health and Hygiene Practices was held by Ms Anita Basavaraju for students of Nerellacheruvu. Topics like taking proper food,  proper way to clean hands, cleaning hands before and after eating food, going to toilets, washing hands after going to toilets, dressing properly, maintaining clean nails etc were covered. Importance of education was also stressed and students were asked to come to school on a regular basis and study hard in their own interest.  The program ended with students preparing fresh orange juice and enjoying the drink.

Similarly an awareness campaign was also organized for women in Kasireddyguda village. Through a PowerPoint presentation they were made aware of the menstruation cycle process, why it happens, what are the precautions needed, the adverse problems ladies face, hygienic practices to follow during the process, usage and disposal of sanitary napkins and the like.

On similar grounds a awareness campaign was also done for girls of Burgula High School. The self explanatory PowerPoint presentation was shown, after which Dr Renuka Basavaraju, a practicing Rheumatologist from US, addressed the girls and resolved their queries relating to menstrual cycle.

On 3rd August a connect program between Burgula gram panchayat women folks and Ms Sudharani – Proprietor, Fashion Threads – was organized in Mahilla Mandal building at Kashireddyguda. Around 50 ladies from villages and nearby tribal areas interested in taking up stitching for employment participated in the meeting. Ms Sudharani briefed on the kind of work that would be given in adherence to strict discipline and efficiency. She informed that the employment would include one week training so that the finished products meet required standards. A total of 37 women registered for the employment. Seven girls who came forward to work at her unit in Hyderabad were immediately employed.

On 15th August after the initial flag hosting and singing of the National Anthem, we distributed 1st and 2nd place prizes to students from 6th to 10 th class in recognition of their previous years academic achievement. In the assembly amongst all students, parents, and village elders, the class toppers were called and recognized.  Village sarpanch Ms Sumana Burgula who was present on the occasion addressed the assembly and spoke about importance of education and healthy practices. School headmaster applauded the students for their achievements and asked all students to perform well so that they could be recognized in future. He also spoke about how education can help them come up in life.

Under its women empowerment program Pragathi distributed 47 more sewing machines in Burgula . This distribution will enable women to take up stitching as their profession and be part of stitching projects which are being brought from time to time in the village.

To make scientific concepts understandable and bring the students closer to science , Pragathi, in association with Dr. Reddy's Labs, conducted a science workshop in Burgula ZPHS . A team of 17 members from Dr. Reddy's came up with 7 simple to do experiments for 6th and 7th class students in line with their course curriculum. Experiments related to  understanding properties of acids, working of an anemometer, anaerobic respiration in yeast, transfer of materials in cells, water purification process, and working of Newtons color disc. To facilitate easy understanding and participation by all students the students were divided into batches of 4-5. Each experiment had a demonstration by the team followed up by explanation on how and why it happened. All students were given the experiment kits and allowed to do the experiments themselves.  There was great enthusiasm seen in the students during the program with students asking for more such programs. The program was very well received by the students and teachers alike.

The school activity program was followed by Village cleanup activity.

On March 31, 2015, thirty-two sewing machines were distributed to women folk in Nerella Cheruvu village of Burgula Grampanchayat.The donation ocurred through the kind generosity of Dr BVN Reddy's family. Dr Reddy is a renowned surgeon practising in USA. He grew up in a village in Karimnagar and understands the hardships of village life. Through sheer hard work, he became one of the toppers in medical college. His life is truly inspirational.

Dr Prakasam Tata, an expert in water and sanitation, visited the village. After his upbringing in a small village in Vizianagaram, he had a flourishing career in the US. He told the villagers, “If you want to grow, you have to become self-reliant. There are many institutes and schemes available - use the opportunities. Constructing latrines and using them will not only improve the health but also allow you to save you money. Work more, earn more and your life will automatically improve”.

Appreciating the efforts of the teachers in moulding a child's personality, he told the students, “Teachers and mothers live to see you grow. They scold you so that you learn and become good citizens”. He made the school kids take an oath that hereafter they will come to school regularly, dress properly, and that they will listen to their mothers and teachers and use toilets. 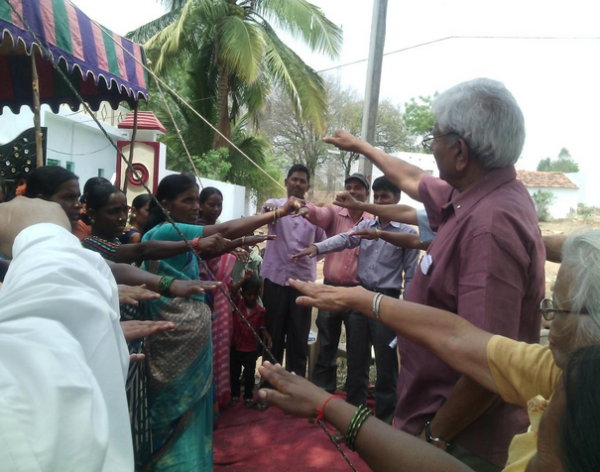 He also made the women take an oath that they will send their kids to school, and not for employment, not be under pressure for child marriages, will become self-reliant, construct and use toilets.

He then visited other projects and will help PWS with water and sanitation projects. Government officials informed villagers of various schemes and thanked Dr Tata for providing so many enlightening facts.